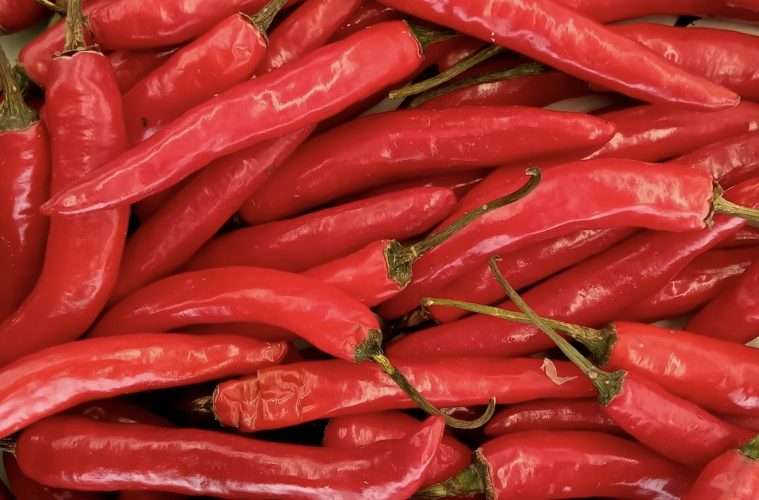 How to grow chillies at home

Beautifully decorative in your garden, and potent on your plate at the end of the day, the rewards of growing your own chillies abound.

Most gardeners and plant people have had a love affair with this exotic group of plants at one time or another. Recently, chillies have experienced an overwhelming surge in interest by even first-time growers. It’s easy to understand why – they are beautiful to look at, attractive in the garden, veggie patch or containers especially when they shine with ripe fruit, and come in so many shapes, sizes and levels of heat that the most blasé of plant people cannot fail to be fascinated by them.

Chillies belong to the Solanaceae family, along with their cousins potatoes and aubergines. They all fall under the genus Capsicum – also the name of the compound in the fruit that gives the chilli its ‘heat’. Capsaicin, found in most Capsicum, is said to cause the release of endorphins in the brain when ingested, triggering feel-good responses. The species originated in Mexico where it was, and still is, used in the country’s traditional spicy dishes.

In the 15th century, many chilli cultivators began to spread around the world and became part of different cuisines and traditional medicines. Chillies have been consumed by humans since about 7500 BC, so are one of the oldest known cultivated crops. They definitely deserve some honour!

There are five domesticated species of chillies: Capsicum annuum (such as cayenne and jalapeños), Capsicum frutescens (such as Tabasco and piri-piri), Capsicum chinense (the hottest chillies such as naga, Habanero and Scotch bonnets), Capsicum pubescens (rocoto) and Capsicum baccatum (aji chillies). While there are only a few species that are commonly used, the are hundreds of lesser-known ones, far too many to mention. Apart from being plants that produce an edible crop, chilli plants are highly decorative and diverse; they come in amazing colours, sizes, shapes and, ofcourse, heat levels! From large jalapeños to tiny Mozambique bastardos, there is a chilli for everybody.

How To Grow Your Chilli Plants

Chillies are always grown straight from seed, which should be sown in trays or small pots in spring once the last frost is over. Sow your chilli seeds from August to November in most parts of SA – in areas where there could be late frost, it’s safer to wait for September. Use a light, well-drained seedling mixture, sow your seeds about 5 mm deep, water well and place on a warm windowsill or in a greenhouse to germinate. These hot numbers originate from warm countries, so require a minimum temperature of 18–25°C to germinate. They generally pop their heads up after seven to 14 days, but some of the extreme varieties such as the ghost chillies can take up to 30 days to germinate. The hotter the chilli, the longer the seed takes to sprout.

Transplant your seedlings when they have two sets of true leaves, meaning the leaves that appear after the first set. Chillies can be planted out into the open ground in a sunny area, into containers, veggie planters or even hanging baskets. Make sure that your soil is loose, well- draining and rich in organic matter. An addition of a teaspoon of 2:3:2 fertiliser to each planting hole will ensure that your young plants get the best start and will flower prolifically. Chillies enjoy humidity, so spray your plants with a fine water spray during dry weather – this will also help stop flower drop.

TOP TIP: Sprinkle a teaspoon of Epsom salts (magnesium sulphate) around the plants’ roots at this stage – also very beneficial for flower production. Warning: Chillies are not happy in a windy position and tend to drop their flowers if they are not sheltered from high winds.

It is important to harvest chillies when they are ripe. They look beautiful out in your veggie garden with their bright reds and oranges, but the plant needs energy to produce more flowers – so use your chillies! Remember that there won’t be any fresh chillies in the shops or in your garden throughout winter, except for the odd imported product, which is greenhouse-grown and does not really pack much of a punch.

There are a few different ways to store them so that you have chillies throughout winter, and the jury is out regarding the best way. Freezing works well and retains the bite; hanging them in a well-ventilated area and drying them out seems to retain the chilli kick in the most effective way. They can also be stored in olive oil in sterilised glass jars. Whatever way you decide to store your summer crop, you will be glad you have those home-grown beauties for winter curries and sauces.

If there is a chilli that you have particularly enjoyed growing or maybe the seed was expensive or hard to find, you can easily keep some of the seeds for the next season. Chilli seed keeps very well and is quite simple to save – here’s how:

✣ Use ripe, even slightly over-ripe, wrinkly fruit.
✣ Cut the chilli in half lengthwise and gently scrape out the seeds with a teaspoon on to a piece of kitchen towel.
✣ Place in a well-ventilated spot so that the seeds can dry out. Make sure you don’t put them in
a place that’s too hot, as extreme temperatures will destroy the embryo.
✣ After a day or so, the seeds will be dry enough to put into paper packets. Make sure that you label the packet with the type of chilli and the date and you’ll have seeds for the next planting season for free!
✣ Store the packets in a cool place.

Luckily there are not many creepy- crawlies that enjoy eating chillies. Snails steer clear of them, as do caterpillars. Just watch out for cutworms – your plants will wilt and slowly die for no apparent reason. Any cutworm bait from your nursery will deter them.

As far as diseases are concerned, bacterial wilt, a fungal disease, is the most common problem when growing chillies. The best way to avoid wilt is to make sure that you don’t overwater your plants. There are organic fungicides available – rather be safe and start giving your plants a spray every two weeks as a preventative move.

Within the hundreds of chilli varieties, there is a group that has become known as extreme chillies. Most of these are either hybrids or crosses that have been artificially created by growers. These exotic and over-the-top varieties, all of which sit at more than 2 000 000 units on the Scoville scale, have become trendy to grow. Chilli-eating competitions are a popular event in countries like the US and UK, where the brave contestants have to consume as many of these mouth- numbing fruits as they can. These have resulted in the sudden demand for the seeds of varieties like Carolina Reaper and Trinidad Scorpion. Varieties such as ghost chillies, Reapers and naga chillies are sold by many private seed companies, but remain difficult to get hold of.