How to grow spinach Spinach and other similar greens are easy to grow and rich in essential nutrients.

In addition to spinach, there are other leafy plants that have a similar flavour and health benefits. Unlike spinach, they don’t go to seed as quickly in hot weather and continue to provide greens almost year round. Because greengrocers often label Swiss chard as spinach, it’s easy to mix them up. In the garden though, the two are very different. While Swiss chard produces leaves almost throughout the year, true spinach is much less heat tolerant. It goes to seed quickly in midsummer and is best grown in the cooler months.

Growing tips: Spinach likes rich, fertile soil and plenty of moisture. You can either sow seed directly or transplant seedlings. In most areas, successive sowing can be done from early spring until early winter, but more often during hotter months. The plants prefer full sun, except in warmer weather when they benefit from semi-shade. Keep soil well-mulched and make sure the ground doesn’t dry out.

Harvesting and eating: Harvest a few leaves at a time from different plants. Use baby leaves in salads
and cook larger leaves. Spinach tastes best when young and freshly picked. Leaves from older plants tend to become bitter. Although this frost-tender climbing plant belongs to a completely different family to spinach, it’s used in the same way, hence the name. The big difference is that Malabar spinach loves hot weather and thrives in midsummer – just when true spinach is bolting.

Growing tips: Sow seeds directly or sow in seed trays. It helps to scarify (use a nail file to nick the hard seed coat opposite where the new shoot will emerge) and soak seeds overnight before planting. With its red twining stems and delicate white flowers, it’s a spectacular addition to a midsummer vegetable garden and will cover a tripod or archway in just a few months. It’s not hardy and will die in areas with cold winters. However, in subtropical areas, it can take over, so keep it contained.

Harvesting and eating: Its nutrient-rich leaves and shoots are tasty and succulent and can be used fresh in salads or stir-fries. The flowers turn into dark purple berries, each with a single seed inside. Leave these on the vine to dry and save the seeds for the following spring. As its name suggests, this bushy perennial is native to New Zealand and Australia. It’s a sprawling, fast-growing shrub with triangular, succulent-like leaves and tiny yellow flowers.

Growing tips: Like Malabar spinach, it’s frost tender and does well in hot weather. It grows happily on the edge of a bed, where its rambling stems can be wound through and over a fence.

Harvesting and eating: Pick leaves regularly. It contains quite high levels of oxalates which can cause kidney stones. Reduce this risk by blanching leaves in boiling water for 30 seconds, stir-frying or sautéing. It has a fresh, almost marine flavour, similar to spinach, but with juicer, more succulent leaves. This semi-hardy annual, also known as French spinach, is more of a cool-season crop, but can be grown during warmer months as it doesn’t bolt as quickly as regular spinach. There are red, green and yellow varieties, all with a similar spinach-like flavour. The red is particularly striking.

Growing tips: Sow seeds directly in well-drained soil in full sun during spring and autumn. The leaves are arranged around an upright stem that can grow up to 1,8m high. It can tolerate drier conditions, but tastes much better when the ground is kept moist.

Harvesting and eating: Pick leaves as needed. They can be eaten raw in salads where the bright leaves add wonderful pops of colour. They can also be stir-fried, steamed or added to soups. It’s unclear where the moniker ‘Swiss’ comes from as this plant isn’t native to Switzerland nor is it widely grown there. This leafy green is a member of the beet family and is one of the easiest crops to grow.

Growing tips: Swiss chard likes full sun and fertile well-drained soil. It grows almost all year round, but is a little more prone to bolting in the hot summer months than during winter. As with beetroot, the ‘seed’ is actually a cluster of seeds. If you direct sow them, the seedlings need to be thinned. A good idea is to grow them in seedling modules first and then separate them when transplanting. Once established, Swiss chard seeds itself happily.

Harvesting and eating: Harvest only the outer leaves by twisting them off at their base with a downward pull. Pick from a selection of plants, leaving enough for the plant to continue growing. Don’t let leaves grow for too long before harvesting, otherwise they become bitter.

Use baby leaves in salads and bigger leaves in stir-fries and soups, or to wrap food for steaming. Young stems can be chopped up to add a delicious crunch to salads. When stir-frying large leaves, cut the stems out, chop them and cook for a moment before adding the leaves. 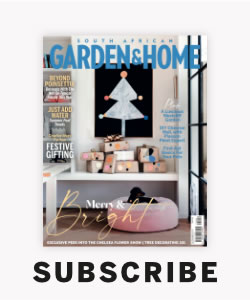